Dear All,
I've finally made the move from blogspot to Wordpress - nothing personal, I just find the system easier to use and as a result the look of the blog is much more modern and fresh.
You're all invited to join me at www.halcyonfuturefashion.wordpress.com for a little housewarming party. There may or may not be red velvet cupcakes.
Hope to see you soon,
Brittany x
Posted by Brittany Stewart at 8:22 PM No comments:

I've fallen in love. It was breathtaking, instantaneous and unplanned. It took just one look, and I was gone.
Ok, maybe that's a little dramatic, but I do believe in love at first sight, and this was definitely what happened when I saw this gorgeous Mary Katrantzou dress in the window of Green With Envy the other day. 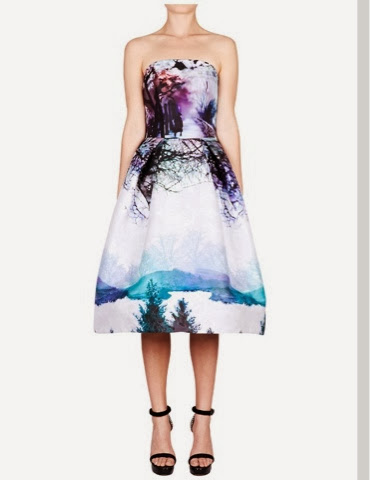 Isn't it gorgeous? I absolutely love the inky indigo winter graphic print, and it's so unusual to see such a design on a ball gown. The boned bodice and wide skirt hark back to a glamorous, feminine period but with a totally modern print. Imagine wearing it to a masquerade ball, or really standing out at a formal event. 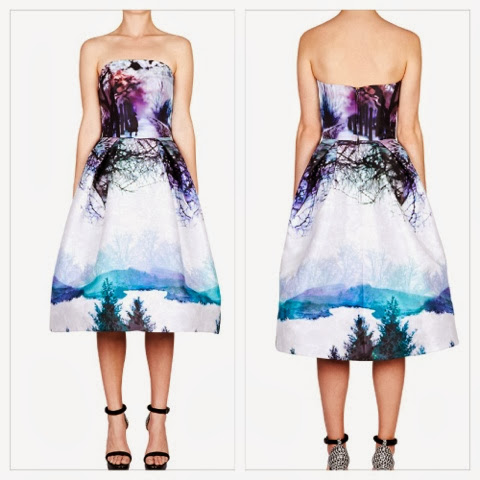 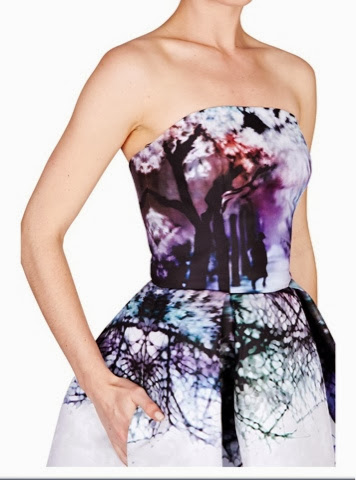 Unfortunately, I do not have invitations to either of those things. Even the next best event, my 21st, is two years away. I am also not currently in possession of $3,370, which is what this beauty will set me back. Sigh. Onto the 'I Wish' list.
What are you currently coveting?
Brittany x
Posted by Brittany Stewart at 6:46 PM No comments:

I'm Never Taking Them Off.

Thought I'd share one of my favourite buys from the other day with you - these black and white animal print harem trouser from Ally Fashions. 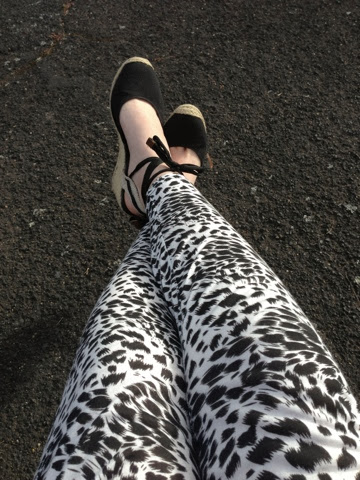 Now I really wasn't a fan of harem trousers before, but after wearing them all day I am a serious convert. So much so that I'm even insisting on wearing them to go out tonight for dinner and drinks. While the style is not the most flattering on the bum, they're so comfy AND a great way to wear this season's printed pant.
For day, I paired them with my white cat turban knit (animal print overload!), a chunky silver chain and a pair of white converse for a sporty/playful look. 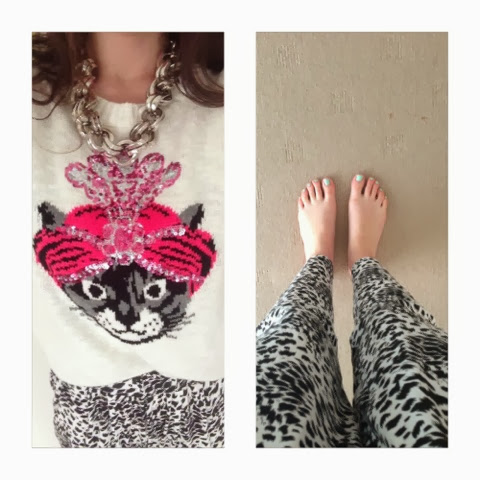 For night time I swapped the jumper for a soft grey t-shirt, leather jacket and wore my black NOVO espadrilles. 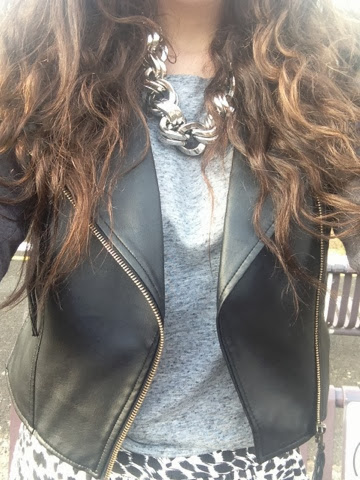 (Excuse the dodgy selfie!)
I love that while they're incredibly comfy, they're also versatile, working both day and night. I'd love to get a gorgeous black or white silk cami to really glam it up for the evening. The best thing though? They only cost $19.99! Bargain.
Posted by Brittany Stewart at 8:45 PM No comments:

Sundays Are Not Made For Working 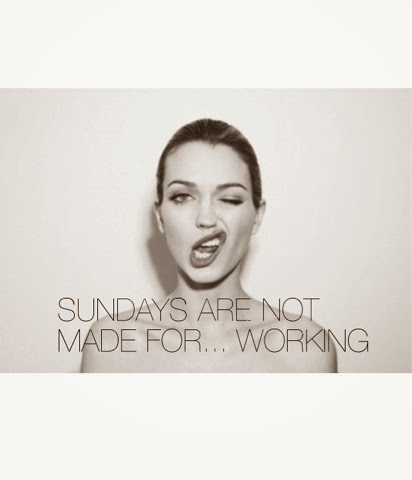 Ain't it the truth. Unfortunately working in retail/entertainment, there's rarely such thing as a weekend. Here's to dreaming about lazy days in bed, visiting markets, brunch with friends and soaking up sunshine. I hope whatever your plans are today, you have a fabulous Sunday.
After I return from work, I'm so excited to start the launch of all my big plans for the blog. November (aka TheBigBloggingMonth) will be an exciting and post-filled month on Halcyon Future, with plenty of reviews, how to's, outfit posts, and fashion and beauty inspiration.
I've also hit 100 posts on Instagram, so for more halcyon fun, don't forget to follow me - @halcyonfuturefashion
Hope you'll come along for the ride!
Brittany x
Posted by Brittany Stewart at 4:05 PM No comments:

Sleek and chic: The New Ponytail 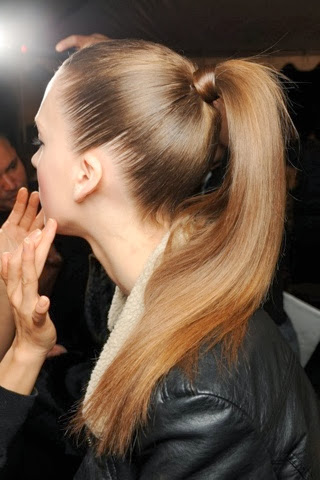 Although my hair is naturally curly (read: frizzy) I do love a straight sleek look. And I don't think there's a more failsafe, go-to hairstyle than the ponytail. But forget the type your mum used to scrape your hair back into when she was getting you ready for school: meet The New Pony.
Sleek and chic, it's a strong look that's also incredibly easy to achieve. Your hair must be poker straight to begin with, and if using hair straighteners make sure you use a heat protecting product. Use an elastic band that's either clear or a similar colour to your hair. Avoid cheerleader hair by opting for a low or mid pony.
Finish off the style by leaving a small section of hair loose to wrap around and secure over the hair tie. Simple!
Perfect for summer when you want your hair off your face, I'll be pairing it with this season's bold and bright lips.
How will you wear yours?
Posted by Brittany Stewart at 7:52 PM No comments: 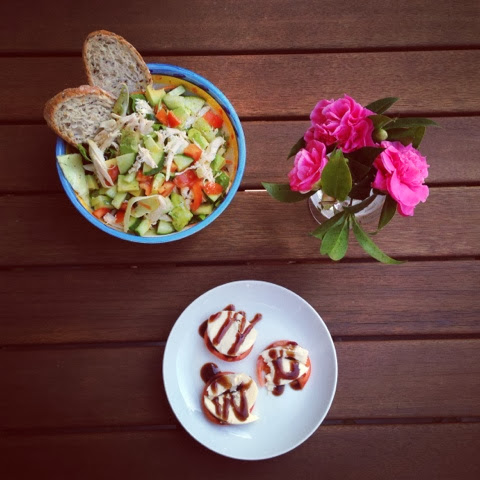 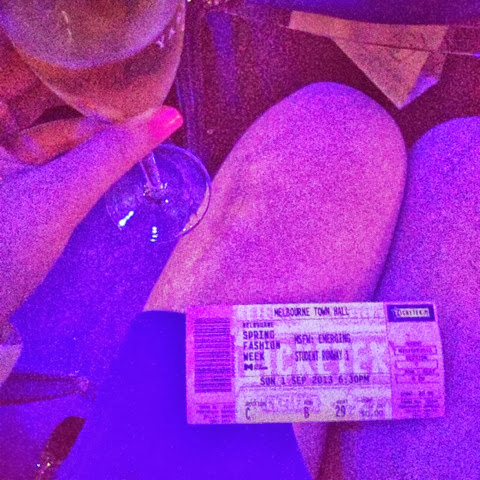 Champagne in the front row at MSFW 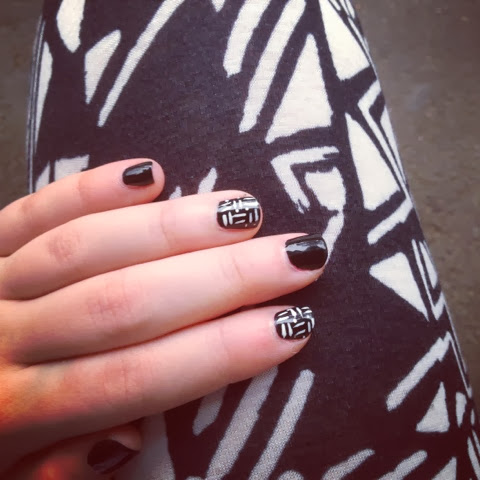 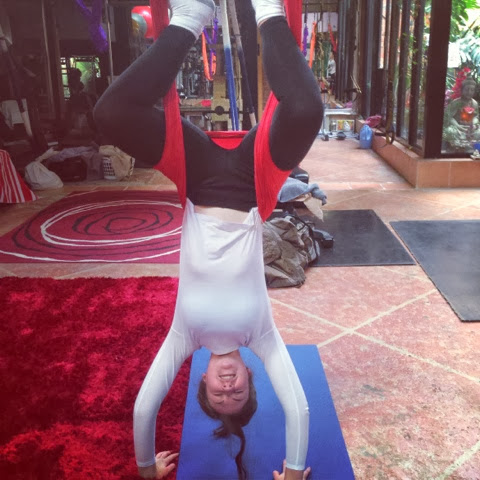 The things we do for research - trying out anti gravity yoga for my other blog 'The Two Review' with my friend Ally. 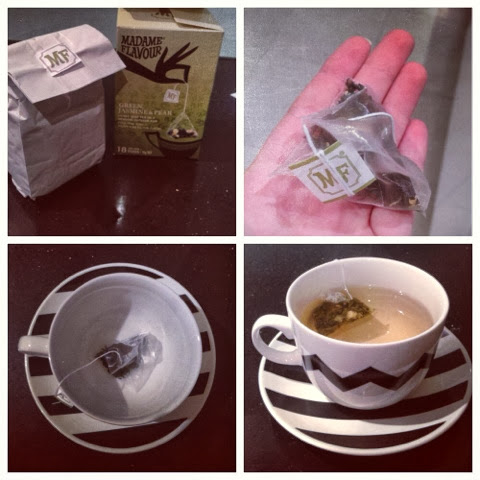 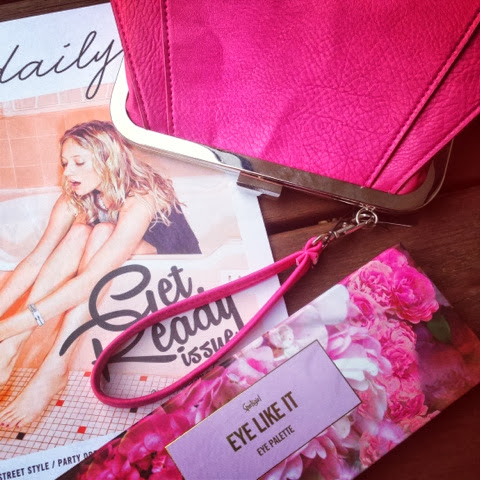 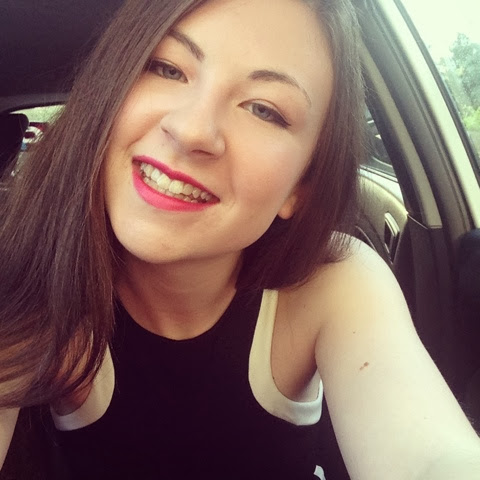 A sneaky selfie before my uni comm ball (ootn post to come!) 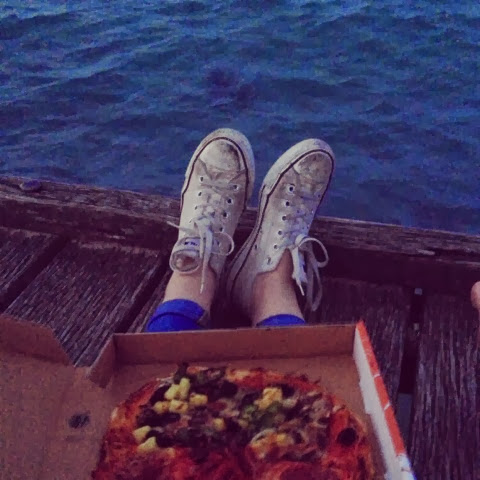 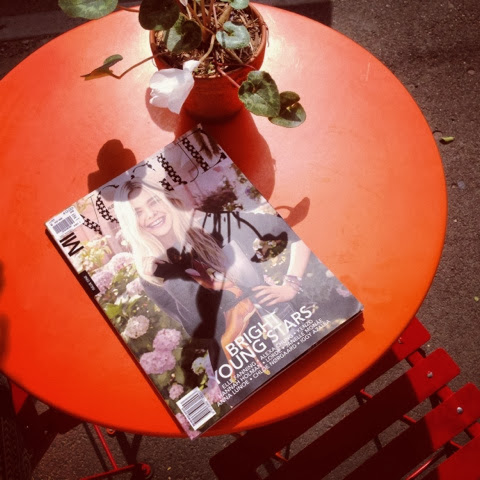 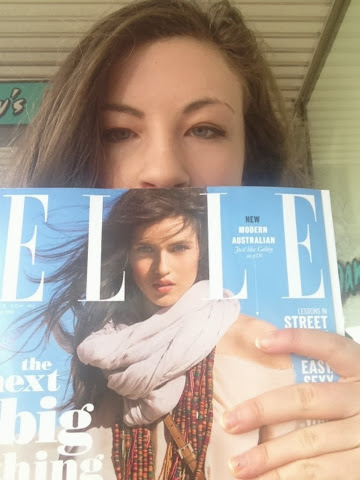 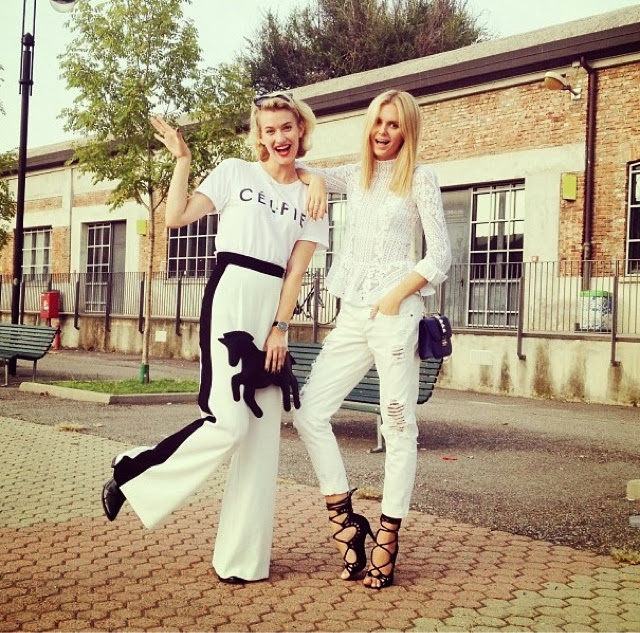 A bit of fashion and outfit inspo from Tuluuvintage and Zanita Zanita!
Hope you enjoyed seeing a snippet of my September - for more fashion and outfit posts, don't forget to follow @halcyonfuturefashion on Instagram!
Brittany x
Posted by Brittany Stewart at 4:35 AM No comments: 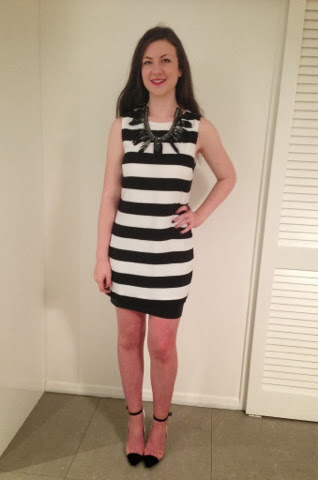 Dress: Cocolatte
Skirt: Bardot, from Myer
Necklace: Emerging Designer Market, Melbourne Central
Shoes: Wittner
The story...
Apologies for the delay in this post - university and work has been rather full on! This was what I wore for my final show of MSFW - the resort show. Given that summer is just around the corner (and bikini hunting must soon commence), I was pretty excited to see what the seasons styles would be. I can report that we'll be seeing lots of cut outs, graphic prints, bright colours and my favourite - monochrome!
It was rather rainy and cold unfortunately so I was forced to wear a jacket and coat over the outfit, so didn't get to show it out as much as I would have liked. I love this black and white striped dress - it's a basic shift shape and I think looks much more expensive than it was (under $20!)
The only downside is how short it is, possibly verging on indecent when worn without tights. Enter this gorgeous leather solution: my new Bardot skirt! I had a H&M black leather skirt that I bought a few years ago and have worn to death. My mum was so sick of seeing me wear it even though it was ripped and tattered, so she bought me this one to replace it! It's slightly longer and more of an a-line shape that I love. I was torn between sizes though - the 8 fit like a glove which is great for going out in, but I really wanted something I could wear in the day too. I ended up buying the 10, which I have to wear on my hips rather than waist, but its a much classier length. It's a new season skirt, but thanks to a Myer promotion was about $20 cheaper than normal. Yey! 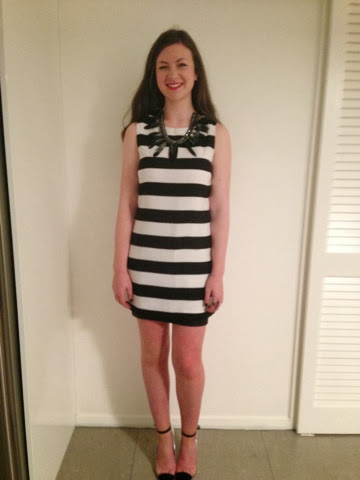 I wanted to keep the looks sleek and simple, so went for my Wittner transparent heels and a silver/black feathered necklace. It's actually more of a choker, which I don't really like, so I simply added a piece of elastic on each end so I could tie it as I liked! My I Scream Nails monochrome mani was still perfect from a few days before - possibly my favourite accessory!
Make-up 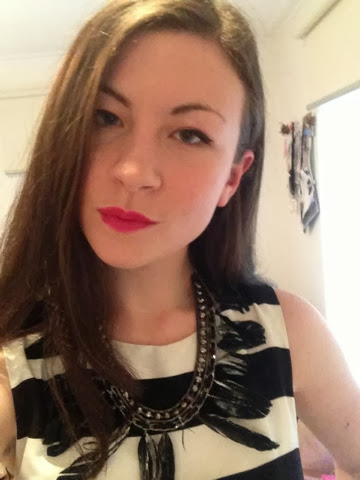 To keep with the sleek look, I decided to straighten my hair, tucking one side behind my ear. I was also pretty keen to rock some lippy, but thought red would be too predictable. Cue hot pink! I thought it was a refreshing change from red, and matched the brights we'd been seeing all fashion week. The rest of my face was kept simple, except for a flick of liquid eyeliner. 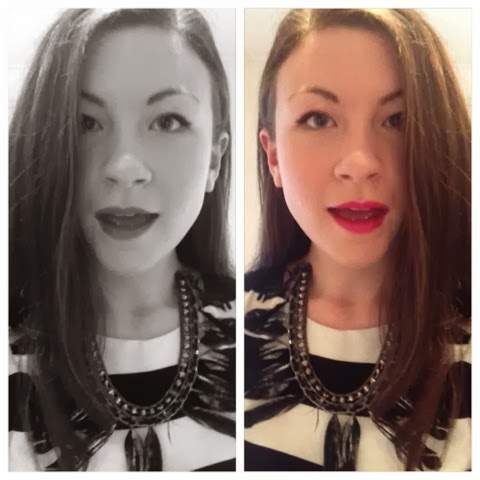 And so fashion week is well and truly over! The spotlight has moved from New York, to London, Milan and Paris. It was a busy but amazing week, and most importantly an excuse to dress up!
Which outfit did you like best? What other street style did you spot? I'd love to hear your thoughts and opinions, so leave me a comment!
Brittany x
Posted by Brittany Stewart at 9:56 PM No comments: